Sea Safety for small-scale fishermen has been an area of interest and one of the main activities of SIFFS. Sea safety training, designing-developing and building better boats on need based, providing quality OBM services are some of the activities under Sea Safety Programme. has also been an area of important work of SIFFS that it has organised many programmes over the years.


In the aftermath of 2004 Indian Ocean Tsunami, SIFFS got itself involved in the Tsunami Rehabilitation Programme in Tamil Nadu and Kerala. This provided SIFFS an opportunity to take up sea safety issue with fishermen in a large scale. Through this programme SIFFS was able to cover 500 fishing villages in Tamil Nadu with the support of Government of Tamil Nadu. SIFFS developed a sea safety kit for small scale fishermen in the early 2000s and this concept has been adopted by the Governments of Tamil Nadu and Kerala with some modifications for distribution of safety kits among fishermen in these states. SIFFS was actively involved in the development of ISRO’s DAT after tsunami 2004.


Some of the very recent initiatives in Sea Safety programmes of SIFFS include:

1. SIFFS conducted training for the officers of the department of fisheries; Government of Tamil Nadu in use of VHF radio sets. It was held at CMFRI in Rameswaram during the year 2016.

2. SIFFS did a survey to study the marine accidents during the period 2006-2016 among fishermen from 80 villages in Kanyakumari, Trivandrum and Kollam districts and organized a one-day consultation in Trivandrum and shared the results of the study. The study collected details of 895 marine accidents occurred during the said period. This helped SIFFS understand the nature and pattern of accidents that occur in the fishery of the Kanyakumari-Trivandrum-Kollam coast.

3. With the financial support of MAERSK, SIFFS organized a one-day Consultation on 11 February 2017 at Hotel Horizon, Trivandrum, Kerala with the participation of a representative and knowledgeable group of stakeholders in fishing and presented the preliminary findings of the sea safety survey and took their feedback on analysis of data before finalizing the report. Apart from fishermen representatives from the area of survey, the participants included academicians in fishery science, scientists from CIFNET and CIFT, leaders of boat association/unions and former senior staff of department of fisheries, Goverment of Kerela and Governing body members and staff of SIFFS.

4. To understand the type of changes to be made in the fiber boat to reduce the risk to the lives of fishermen when their boat capsized in cyclone, SIFFS organized a one-day consultation programme in SIFFS Boatyard, Veli, Trivandrum on 21.02.2018. Participants included selected fishermen who were caught in and survived the OCKHI Cyclone, the Naval Architects from Central Institute of Fisheries Technology (CIFT) and Marino Navale, Cochin (a group of naval architects who are associated with SIFFS in the design of boats) and the Technical team of SIFFS Boatyard.

5. The sea safety consultation organized by SIFFS suggested a programme to familiarize fishermen use the basic sea safety equipment like life jackets, life buoys, first aid kit, radar reflector and reflector tapes etc. in their boats. SIFFS having convinced on the need for this programme initiated the process and is in the process of providing a ‘safety kit’ consisting 6 units of life jackets and life buoys, one first aid box, 10 meters of radar reflector tape and one radar reflector as free of cost to the multi day fishing boats it has delivered since then.

6. In 2019-20, SIFFS continues the awareness building programmes on sea safety and has published a pamphlet containing important points for Sea Safety, both in Tamil and Malayalam.

7. SIFFS developed sea safety video and it is still being used in Tamil Nadu 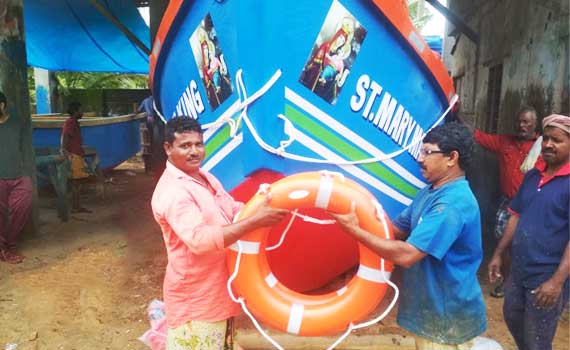 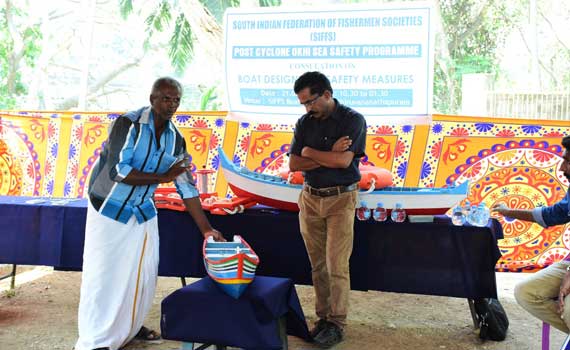 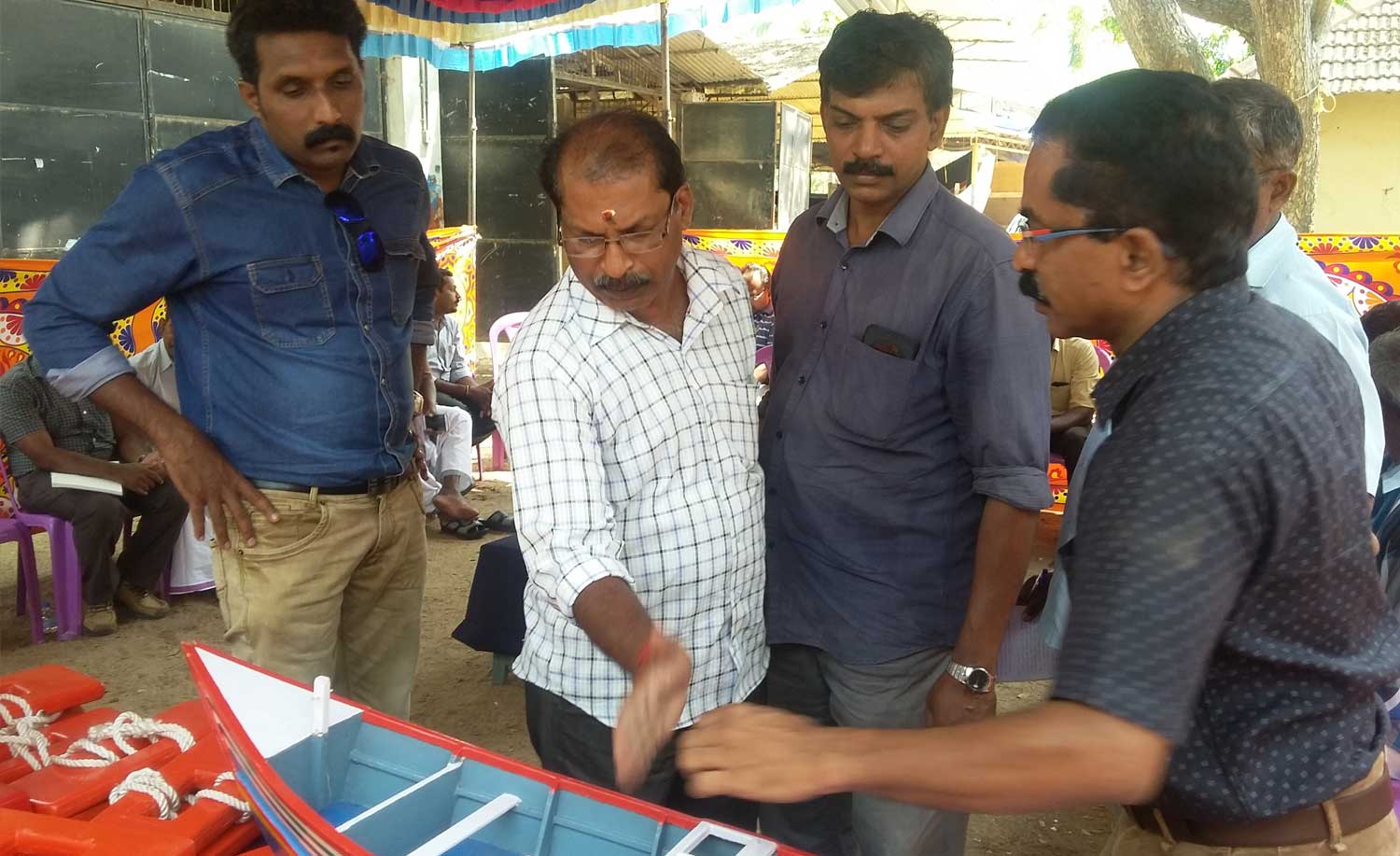 Post Cyclone Okhi: Safe boat designing Consultation: Mr. Baiju, Mr. Manjush, Marino Navale, Cochin (a group of naval architects who are associated with SIFFS in the design of boats) and the Technical team of SIFFS Boatyard.